Another Hero with a Bum Leg 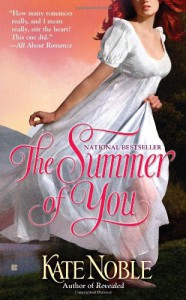 Well that was... unsatisfying. The main romance didn't interest me at all. I was more involved with what was going on between the minor characters, Victoria and Andrew, so the fact that their relationship was resolved rather half-assed was a major disappointment. Additionally, a major plot thread revolves around the mystery of who is robbing people near the town, but the big reveal kind of came out of the left field. Not in an "Oh so that's who did it" sort of way but in a "Who the hell is this character?" way. So all of that, plus the slow meandering feel to Noble's writing left me feeling pretty "meh" about this book. I might give Noble another shot and read the next book in the series, but I won't be chomping at the bit to get it.