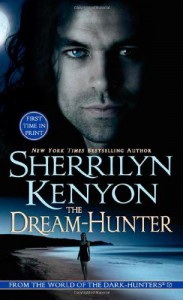 Geary is an archeologist whose life mission is to prove that Atlantis really existed and she has been getting closer to finding it than anyone has in the past. This is making the Greek gods twitchy, since uncovering the lost city would mean unleashing the Atlantean god nicknamed the Destroyer. To solve the problem, the Greek gods decide to kill Geary. However, Arikos, a dream-hunter, has become obsessed with Geary, through her dreams. When he hears about her upcoming termination, he makes a deal with Hades to postpone her death for a couple of weeks.

My main issue with The Dream Hunter is that the plot is all over the place. There were so many different storylines going on and none of them were really fleshed out. This really killed the suspense, as no single aspect was focused on enough to get invested about what happens to the characters. There was also a ton of exposition about Kenyon's Dark Hunter world that probably wasn't needed to progress the story. At least not until near the end when Kenyon suddenly starts inserting a lot of character cameos and dropping previous main characters' names.

Despite these issues, I still primarily enjoyed the novel. Seeing a different area of Kenyon's Dark Hunter world was interesting and the characters were entertaining enough to hold my attention. Basically, its a fun romp if you're familiar with the Dark Hunter series, but I wouldn't recommend this as someone's first Kenyon book.