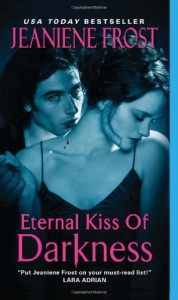 Eternal Kiss of Darkness follows the romance of Mencheres (a side character from Frost's Night Huntress series) and Kira, a private investigator.

Mencheres has grown weary of life and has put into action the means for him to commit vampire suicide. At least that's his plan until Kira stumbles into his life and unwittingly saves him from going through with his first attempt.

This would have been a really boring book if it hadn't been for Mencheres and eventually Vlad. I felt Kira was way too "mary-sue" for Mencheres. I loved that she was portrayed as level-headed and strong, but nothing about her was interesting. She had no grief about her past (despite being abused by an ex-husband) and selflessly devotes a large chunk of her income towards her dying sister. Kira just had no emotional settings aside from acceptance and concern. She found out vampires existed and was like "oh okay". In fact, that was basically her reaction to everything in this story. "Oh Mencheres you can fly? I guess that's okay." "Oh, some bad ass vampire is framing you and trying to force you into killing yourself and giving him your power? Well, okay then." "Oh! You're being forced to kill me and make me into a vampire and I have no say in the matter? Hmmm okay. I won't even be upset when I wake up." I mean holy crap lady, have a reaction about something that's happening around you!

Other than that, the story was okay. I always love a Chicago setting and a large chunk of the book takes place in that area. I also really loved Mencheres penchant for water, for some reason I found it rather cute. I just really really wish that he had been paired with a more interesting female character.

I would recommend this to fans Frost's Night Huntress series, because I think that without having a familiarity with the characters from the other books some of the charm would be lost.